The Woods Neuromodulation Lab and Bowers Lab at the University of Florida, along with collaborators at the  University of Arizona will investigate whether exposing older adults at risk of developing Alzheimer’s 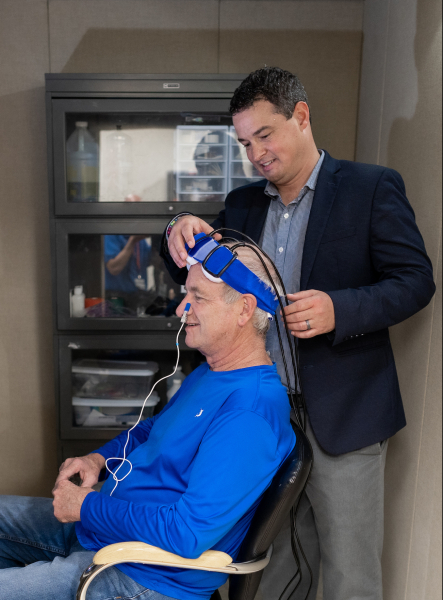 Dr. Woods applies near infrared clusters to Dr. Michael Murphy. Dr. Murphy is not involved in the study. Photo by Louis Brems.

disease to near-infrared light may improve their cognition, mood and brain function in a newly funded R01 grant from the National Institute on Aging.

The Revitalize Study is supported by a $3.8 million grant from the National Institute on Aging, $2 million of which will go to UF. It will be the largest trial of its kind to examine the effects of applying near-infrared light noninvasively to the scalp through a cap placed on a participant’s head.

If effective, near-infrared light could offer a safe, easily accessible intervention for Alzheimer’s, a disease that currently has few effective pharmaceutical therapies, said Adam Woods, Ph.D., an associate professor of clinical and health psychology in the UF College of Public Health and Health Professions and one of the study’s principal investigators.

“There is a long history of basic science research demonstrating that near-infrared light applied to neurons and other cells can increase mitochondrial function, or the energy metabolism of the cells,” Woods said. “Many different brain-based disorders have a major component of brain metabolism or brain energy being altered. Being able to improve brain energy could have wide-spanning impact on a number of behavioral and brain functions.”

Near-infrared light technology is approved by the Food and Drug Administration for the treatment of musculoskeletal conditions, such as muscle pain and arthritis, and is considered safe.

“The intervention is relatively low cost and low risk and if it is effective, then there is a possibility that it could be adapted for home use by individuals in the future,” said Dawn Bowers, Ph.D., a UF professor of clinical and health psychology and another of the study’s principal investigators.

The new Phase II clinical trial builds upon the results of a McKnight Brain Research Foundation-funded pilot study of near-infrared light applied to the scalps of healthy adults.

“We’re trying to enhance function in some key areas of the brain that we think are important for aging and Alzheimer’s risk — brain areas like the temporal and frontal lobes, which are important for aspects of memory and complex executive functions, like problem-solving skills,” said Gene Alexander, Ph.D., a professor in the University of Arizona’s departments of psychology and psychiatry and a study principal investigator.

Participants will undergo a series of cognitive and brain imaging tests before and after the intervention to measure any changes to brain function and structure. One of the imaging devices the team will use is a special type of magnetic resonance spectroscopy that is one of the few in the world able to measure mitochondrial function in the brain noninvasively.

In a second project — funded by the Parkinson’s Foundation — Bowers, Woods and Chris Hess, M.D., an assistant professor of neurology in the UF College of Medicine and director of the Veterans Administration Parkinson’s Disease Consortium Center at the North Florida/South Georgia VA Medical Center, will conduct a pilot study of whether near-infrared light applied to the scalp can alleviate Parkinson’s symptoms in participants.

“We’re all living longer as a product of improvements in medical science and a variety of other factors, but we’re not living healthier and longer,” Woods said. “Our goal is to help find ways that are accessible and safe to help people live healthier, longer lives.”

Congrats to Cheshire Hardcastle for successfully defending her qualifying exam